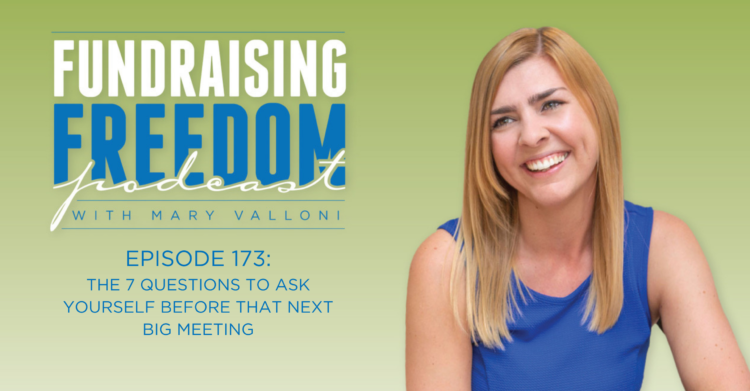 Today we’re talking about the seven questions to ask yourself before that next big meeting. If you’ve been following the podcast for a while, you’ve been following the seven steps that I teach in my book, Fundraising Freedom.  On all the lessons that I’ve taught over these last 173 episodes, I hope that you’ve gotten to a place where you realize that the secret to the sauce is your volunteer team. But I want to remind you that when you recruit and build a team around you, the natural response is that they are going to be fired up. And they’re going to want to introduce you to new people. I know a lot of people talk about referrals and asking somebody to introduce them to somebody else. And there are lots of different approaches to getting the meeting. But I am a huge fan of empowering your volunteer team to open up doors and really be the face and the advocate for the work that you do.

Today’s conversation is going to help you through that.  It’s really going to give you some tools so that you know when you walk into that meeting, whether that meeting is on video, a phone call, or you are actually meeting face to face that you feel 100% confident and secure, and what it is that you’re going to share with them.  The first question that we’re going to talk about is who is in the meeting? This is not a tough question here. But you have to know who’s going to be at the meeting.  There have been times where I think that it’s going to be one person, then somebody else shows up. But if you can identify who are the key players will be in the meeting, that will help you so much.  Now you can really assess the room, how these people are going to interact with each other, and you can determine who should be in the meeting with you. Now, sometimes a volunteer is going to set up that meeting for you. So, in an ideal situation, you’re going to have your key volunteer with you.  We really want to ask the question of who will be in the room, their exact title, how to pronounce their name, and their key ability to make decisions.

Number two, what is the purpose of the meeting?  Nobody wants to waste anybody’s time; you don’t want your time to be wasted and you don’t want to waste someone else’s. So, let’s get right to the point of why we are meeting in the first place.  Maybe it’s just an introduction. Maybe the purpose of the meeting is just a “get to know you meeting.” And it’s not about asking for money, it’s about just getting to know them and seeing if this is a good fit. Maybe the meeting is an opportunity for them to volunteer with your organization or with your cause.

Number three, what’s your agenda for the meeting? How is this going to go? Are they going to introduce themselves? Am I going to introduce myself?  Is my volunteer going to introduce me?  Now, I’m not saying that you physically have to write out an agenda or that you have to hand them an agenda.  And the reason why I had that agenda laid out was that my volunteer told me to. I didn’t just come into this meeting, super, super organized with that agenda, my volunteer told me that it was how to win over our director. This is how you’re going to get him to say yes, you’re going to wow him from the moment you walk in. And that’s exactly what we did. And he absolutely said yes.

Question number four is, what is the most ideal outcome? After everything is said and done, what do you want out of this meeting? What’s the intent? It could be just I want to get to know them, I want to see how we could actually work together how we could partner together to make a difference. That very well may be the absolute goal of this meeting but think about the desired outcome.  If it’s a financial commitment, think through what it is that you’re going to actually be asking and know exactly what it is that you want.

Number five, what obstacles could stand in the way? I want you to really think through this because it’s something that you could actually take care of before it becomes an issue or becomes something that rears its ugly head later on. What could possibly stop you from moving forward with this relationship during this meeting? Now, for those of you who are working with organizations or companies that have a lot of employees, you know that there’s a lot of voices that are ringing in the leadership’s head, what is their favorite charity of choice? What are they trying to accomplish as an organization or as a company?  You better believe that the obstacle is going to be all those other voices, all those other people who are going to be asking questions about why or why didn’t we decide to give our money here? Why did we decide to get plugged in here? So I want you to be thinking about what can you do to show that you align with their values, that you align with their goals, whether that’s marketing or promotion, or whatever they’re trying to do to get their message out that you are a perfect fit.

Number six, how can you best serve them? Now, this goes back to what their plan is.  What are their goals? How can you help move their mission forward? I see that all the time with our charities that we have the ability to take their mission to an entirely new level. If you work with people who are in a different country, if you have access to community members that maybe they would never have access to, that is huge, because now you’re saying ‘hey, I can get you access in there. I can show the community what a huge difference you’re making.’ And now you’re this great testimonial of what wonderful people they are and what a huge difference that they’re making in the world. So remind yourself of those things that you can do to actually bring something to the table. This is where you want it to be a win-win, right? We don’t want a relationship where they’re giving us a handout and we’re begging all the time. That’s where this question comes into play is what is in it for them? Why would they say yes? How can you serve them to make sure that they feel like they came out ahead?  I try this with every single organization and individual that I work with, I really want them to feel like they won here in this relationship that they got more out of it than they put in. So if that means that it says something about their identity, if it says something about their organization, they get that good credibility that comes with it. You can’t pay for that. That is something that people money just cannot buy. And so you have something to offer them that they would never be able to get anywhere else.

Now let’s think about how you are going to actually follow up with them. When we talk about enhancing your brand, I really want to make sure that you have that case document. I encourage missionaries and those who are raising less than $100,000, that a one-pager is more than sufficient for these conversations. But if you are trying to raise money for a large-scale organization, and you’re trying to fund a really large project, you need that case document, I often call it a presentation piece or your menu, lots of different names for it. But in the fundraising space, we call it a case document.  It reminds them of and confirms everything that I already said during this meeting. And so now this is the follow up that I’m going to have, ‘hey, I’m going to email you this document.’ Make sure to include a timeframe as well. What’s our next step? Are we going to be meeting again? Are they going to be meeting with their committee? Are they going to be getting together and deciding on what they’re going to do in the next week or two? I just want to make sure that that’s really clear during the meeting. That way, you know exactly how you’re going to end the meeting.

The primary thing here is to be prepared. Oftentimes, I tell people the butterflies and anxiety and all that stuff comes because you’re not prepared. When you do the research, when you come in confident about what it is that you’re going to share, you’re going to come across so much better, and people are going to recognize that there’s something different about you. You can imagine how many people walk into these offices or have these conversations with people of power and they are extremely nervous.  However, if you come in totally counter to what everybody else is doing and you’re confident in what you’re doing, you will be surprised how that translates and how that turns into dollars into volunteers into partners.

I just want to continue to encourage you to stand firm on what you believe and what your cause is all about and present yourself truly as an expert in your space. Utilize that volunteer who is working with you to be an advocate and to really be that testimonial for your organization. And then speak with confidence because you know that this person is already funding and supporting you, and why wouldn’t everybody else want to do the same?