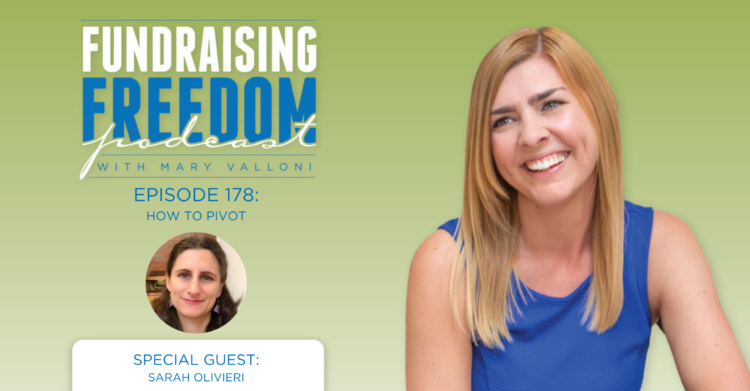 My guest today is Sarah, Olivieri. Sarah is the founder and the heart behind the company Pivot Ground. She’s a nonprofit business strategist, an author, and a former executive director. I think she’s going to bring just a huge wealth of information to you on how to pivot during this season.

Tell us a little bit more about you and the work that you do.

Well, I come from a nonprofit background and I’ve worn so many hats from secretly fixing the toilet after everybody left so nobody knew and that didn’t become my job officially, to Program Director, conference coordinator, graphic designer, teacher, you name it, I probably did it at some point. I’ve been executive director and founder. I was once the first executive director of a foundation. And then I actually shifted over into marketing and I built a marketing agency for nonprofits. That led me right back into the heart of what makes nonprofits tick – how they’re organized and how they bring their people together so they can really make the biggest impact possible.

Tell us about your “impact method” and how affected the lives of the nonprofit leaders you work with.

The impact method is really based on three things that I think every nonprofit needs, and every for-profit to be successful, which is a process of improvement. That’s how we deal and adapt to change in an ongoing way. And also, how we root out the issues that are getting in our way in a proactive manner. So many nonprofits are stuck in reactive mode and they’re running to put out fires all the time. When you dig out your own issues proactively and address them, you don’t have to be in that firefighting mode all the time. Then, your issues become opportunities instead of challenges. The second thing is an actionable strategy. Strategic planning is one teeny piece of making your organization run properly. It’s actually making that plan actionable, where a lot of work comes in. And the third thing is, I call it your modus operandi. It’s how your organization is structured, what glues everybody together. What is the core belief that your organization holds? What are your values or guiding principles? How is your team organized? What are your systems and processes? How is everybody collaborating and coordinating to work together, and there are some traditional ways of doing this that actually aren’t that effective. And yet, they’re very prevalent. There are other ways to organize your people that are much more enjoyable and much more effective.

Based on your own personal experience, what do you think is working in the organizations that you see?

The ones who are doing it really well who are following the things that they should be doing, and letting go of the things that aren’t really making a difference. This can be hard because sometimes the things that don’t make a difference for our nonprofit are still really impactful. But the organizations who are doing it well, right now, in the middle of the pandemic, they’re raising more money than ever before. They’re hiring people not firing people, they are growing, they’re expanding their impact their reach, and their base of supporters. So all of this is really possible right now. And they’re also they’re not overwhelmed. They’re not burnt out, they’re taking time to address the pandemic, one of the things we do in the impact method is every month, we assess how much time we are spending on each area of our organization on routine things. And we’re monitoring our total capacity as human beings.

Well, staying focused is one thing that I’d really recommend. A lot of people ask me, well, Sarah, if I’m the only one, how do I get out of being overwhelmed? How do I stay focused, and the first step is to take things off your plate and throw them in the fireproof garbage can that I am now virtually handing you because their fires will burn themselves out. That is the best way to get some more time and focus back in your day is to just stop doing some things, eliminate them. And that works even if you don’t have anybody to delegate to. After that, do get somebody to delegate to or at least get a machine as a stopgap to delegate to some get some automation tools in place. You can’t do it alone. That’s probably my second tip; you have to plan to get another person on board whose job it is to do the work as soon as possible. So, for most startups, this means probably you are the executive director, and you need to hire an assistant as soon as humanly possible. They don’t have to be full time, but 10 hours a week, it’ll be huge, what you can do you full time and an assistant 10 hours will be incredible. My third piece of advice is, think of your startup, just like a for-profit startup would be you’re going to go through a planning phase and a funding phase, and then a planning/doing phase and then a funding phase.  You’re not going to be both fundraising and doing at the same time until you’re really big enough to do those two activities, because you’re really starting two businesses at once. When you start a nonprofit, you’ve got your impact business, and you’ve got your fundraising business. And so related to that, the biggest mistake I see new nonprofits make is they get a little money in, and then they just start their programs as though they’re going to keep going. And sure enough, before too long, they’ve run out of money, they have to cut back on their programs, and then they don’t have any capacity left to fundraise.

So here’s what I tell people. Create your initial first plan, get your vision on paper, maybe you reach out to one or two major donors who are going to give you enough money to turn your plan into an actual let’s call it an alpha experiment, or a beta test. You’re going to flesh out everything that your program should look like initially, maybe there are two versions, you’re going to test simultaneously, and then stop and fundraise for however much that plan costs. Make sure your plan includes the cost of evaluation. And then here’s the really hard part for you heart-driven people, do not start your plan, until you have raised enough money to execute the entire experiment. Then, once you execute that entire experiment of a plan, you’re going to plan to stop your first version of your plan. And then you’re going to ask, are we doing more of this? Or are we do we have to experiment again, and then depending on which thing you’re going to do, you’re going to go and fundraise for that all along, keeping in mind that at some point, you’re also fundraising for your ability to fundraise more, because you have to always be growing that side of your business as well.

What your thoughts are on what is fundraising freedom? What does that mean to you when you hear that?

I love that question. It kind of has two meanings to me. One is that your fundraising gives you the freedom to make the impact that you really want to make to run experiments. I think, unfortunately, the nonprofit culture we’re locked into is we don’t take risks, and it’s a world of best practices. That couldn’t be further from what we need to be doing. Most nonprofits, I say they have a mission impossible. They’re trying to solve the world’s most complex never solved before problems. That means you have to innovate, and you innovate by taking risks and running experiments. There is no best practice for solving the unsolved other than maybe the scientific method. And so we really need to change that culture. I think freedom and fundraising partly mean that your fundraising is empowering you to be an innovator as a nonprofit. Then the other thing I think of is that, that you find joy in fundraising, that fundraising doesn’t feel like this side chore, but that it feels like you’re building a tribe of supporters, you could call them investors, people who are trying to achieve the same mission that you’re trying to achieve, but you’re doing it through your programs, and they’re doing it with their money, and you’re excited to talk to them and think of them as partners.

Any parting advice from you for these organizations and individuals to really tackle this season and moving forward?

My standard advice is that good advice is easy to find, especially if you pay for it, because a lot of the best advice and doesn’t cost very much. But people who give good advice are usually committed to seeing results, and they at least want you to have some skin in the game. But the hard part is not finding good advice. The hard part is following it. And so I encourage you to be brave when things are tough. Resist the urge to just throw it all up in the air and go by your gut. Keep following that good advice just and return to it. It’s kind of like meditation, you’re not going to be 100% focused or following the advice all the time, but just keep coming back to it. It’s never too late to try following good advice again.