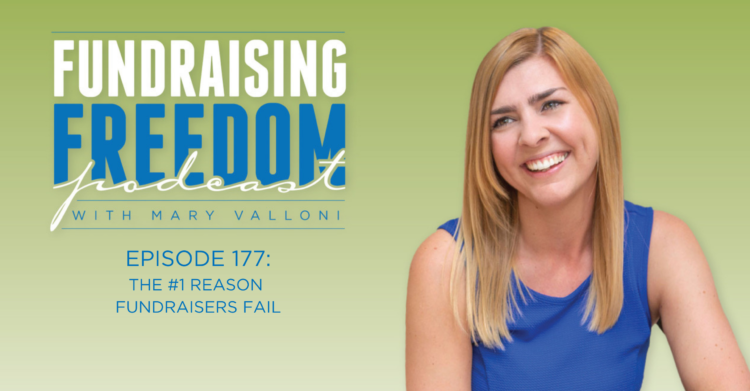 Today we’re talking about the number one reason fundraisers fail. Contrary to popular belief, it’s not because we didn’t work hard enough. The number one reason fundraisers fail is from internal conflict. As you know, right now we are dealing with a pandemic, more than likely about to be hit with some economic challenges because a lot of people are without jobs at this point. And so there’s still a lot of uncertainty in the environment that we’re in.

For those of you who are familiar with a SWOT analysis, this may be something that you need to sit down and do so that you’re aware of what’s going on. A SWOT analysis stands for Strengths, Weaknesses, Opportunities, and Threats. It’s really just sitting down with a sheet of paper and writing out your strengths, where your weaknesses are, what opportunities you have, and what threats are out there. Once you do this, you can start to see what’s actually going on behind the scenes.

Sometimes, I think that we forget that our volunteers, our donors, and the people who are in our inner circle all have to work. Collectively, they all have to work together for the common good of your cause. And if you have any conflict that’s going on, you’re going to have to address that before you send your volunteers out to share the great reasons why people should give to your cause. If you cannot address conflict you’re going to have a really tough time raising funds. Let’s talk through that.

Conflict typically comes up because you’ve had a disagreement or a power struggle. You’ve got people who have money, you have people who have influence, and they’re used to being in charge. Then you put them in a room together and you try and get them to work as a team and sometimes, the power struggle ensues. Also, a lot of people you recruit may have an ego and so pride and/or jealousy creeps in. Or, maybe when you’re dealing with conflict with staff you’ve got people who think that they should be compensated more, and they’re not, or you don’t have the funds to increase their finances. Whatever the reason, there are two main reasons that conflict can arise – communication and emotions.

When you think about communication, you may think that you’re doing a fairly good job sharing with your people. But if you are lacking that communication, if you are giving either poor information, no information, lack of information, misinformation, or even say you give really good information but for some reason, the other side is not receiving it, you’re going to still deal with conflict. To really get through, you just need to be clear, concise, accurate, and timely. You’ve heard the story so many times from people where you visually start to create colors and create locations as someone is telling you a story. You created this elaborate picture inside of your mind to fill in the gaps of this story that’s being told. If we don’t give a clear story and don’t give someone all of the information that they need, they will fill in the gaps. If a volunteer feels left out, they feel like their voices aren’t being heard, or a staff member feels like they’re disposable, they’re going to start to find alternative places to go and they’re going to leave and quit. And that is the last thing we want to see is our volunteers drop off, the people that we love and care about our staff members, we don’t want to see any of them leave during this time, because of uncertainty or lack of communication.

Number two is emotion. Emotions can sometimes take over. And then all of a sudden you find that your people are angry. So then they rise up verbalize that. If you put somebody in a position where they don’t have the information that they need and communication is not great. They’re not going to put themselves out there because they don’t want to be put in a position that they could possibly feel shame. Fear is obviously huge. Many of us deal with fear. Those people who really process things in their heads deal a lot with fear. Emotions also come up because of past hurts, trust issues, etc.

Now that we know that emotions and communication are important to overcome the idea of conflict, one thing that we need to do is we have to have some sort of plan in place to address conflict. You probably have gone through some conflict management stuff in the past. But the main thing here is just conflict resolution. When conflict arises, what do we need to do to actually come together and create a solution to the problem? Now, there are some things that you can do, such as set rules as an organization where if there is an emotion that comes up in text messages and emails, to immediately pick up the phone. You need to hear that person’s voice and you need to know that it wasn’t coming across as being upset, or whatever that is, and you need to be able to address it right at that moment so you can talk through the situation and figure out what we’re dealing with.

One last thing I want to leave you with is if you are having an issue with a staff member, donor, or other volunteers, do not vent to your volunteers or another third party. What happens is they will take up that conflict and pick sides. So then, when you’ve resolved the issue on your side, the volunteer still may dislike the person which can lead to an even bigger conflict. So just don’t do it.

I hope today’s conversation has been helpful for you, wherever you’re at. I hope that you don’t have any conflict in your organization. But I’m going to bet that if you have at least one volunteer, if you have one, one staff person, that you’re going to deal with conflict at some point. I hope this helps you navigate through that and know that you’re not alone. Conflict is normal. And sometimes you’re dealing with issues that happened years and maybe even decades ago that have never been addressed. I want to see your year-end fundraising being so successful, I want people to look at you and say, that’s an organization I want to align with. That’s an organization that has integrity, and they have, you know, they’re honest, they forgive each other, they love each other. And they want to, they want to really create an impact in the world, I want to be a part of that. So you can see where when this conflict is addressed, you are going to be so much more attractive to your donor base, and more people are going to want to be a part of it.