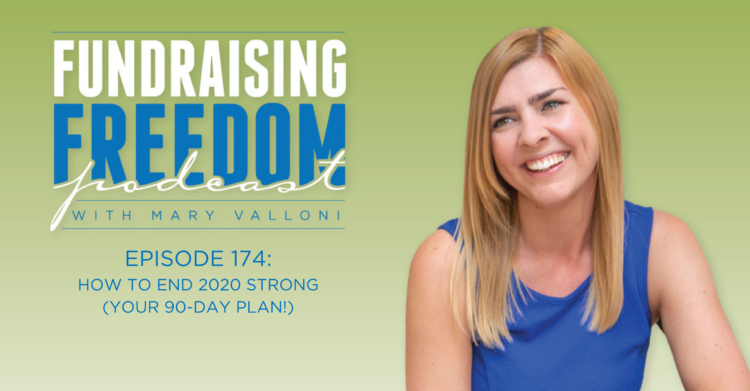 Today, we’re talking about how to end 2020 strong. And we’re really going to be talking about your 90-day plan. These last 90 days are going to end the year strong and allow you to really come into these final last months with some clarity, focus, and really give you some practical steps on how to actually achieve the goal that you’re looking at.

As many of you know, December is the largest giving month of the year; more than 30% of all the donations for the year are going to come in December. You don’t want to miss out on that opportunity. And you don’t want to miss out on actually achieving the goal that you have for your budget and for your organization. Let’s start off by going through the FREEDOM steps. I know some of you are familiar with my freedom process but for those of you who are brand new to this, I will give you a brief overview of the Fundraising Freedom steps. This seven-step process works no matter what the size of your cause is, no matter what the size of your budget.

Step number one, focus your vision. How much do you want to raise between now and the end of the year? What is it that you can do in order to raise these dollars? Maybe it’s sending out a year-end letter, or engaging people in some holiday fundraiser. You’re going to start researching and trying to figure out what do you want to do in order to raise those dollars. And the research phase, which is step two, is really just you looking at what options are out there as well as what people are doing to raise funds. Step three is to enlist your team. Now you’re going to look at who you need to bring to the table to make this happen. You may have a board, you may have an advisory group, or you may have some people who are already invested in helping you fundraise. But if you don’t, you may decide that you’re going to bring together three to five new people or just a couple of people together so that you can start having this conversation. Then, you and your team are going to brainstorm how you plan to meet your goal. Enlisting your team is simply bringing people together for a common purpose. This is with anything that you do. If you can find a couple of people who are all focused on the same thing, you’re much more likely to actually achieve your goals.

Step 4 is to enhance your brand. What kind of materials are you going to need to wrap up this year? Are you going to post some information on your website? Create some additional flyers or pieces of communication to give to people? Are you going to gather people together? If so, you need to send out invitations about the fundraiser you’re doing. It doesn’t have to be overly complicated. I think that that’s where sometimes we get locked in our head that it has to be super elaborate. Now, don’t get me wrong, if you’re trying to raise a significant amount of money, the more you’re trying to raise, the more elaborate your materials need to be because we need to make sure that people know that you are a valid organization.  Once you have your materials, your name, or branding for this year’s activity, you jump into the next step which is to deploy your team. This is where you let them loose and you want them to help you spread the word and get people plugged in. In step six is where you actually ask for money. And I call that organize your ask. I have to remind people through the fundraising freedom process that you are not asking for money in step one. This is why so many organizations and so many individuals really struggle with their fundraising; they run through their entire list and they go after the people who are friends and family and those who are in your inner circle, and you only have so many of those people.

Finally, step seven is all about making your difference. So now it’s December 31, you’ve raised your funds and now you actually go put those dollars to use, and make a crazy, incredible difference in the world. And then you go back and you tell your donors about it so that they can continue to give again.

Now, this 90-day plan, as you can see is obviously something that you can stretch over six months, nine months, a year. The one thing about having a condensed amount of time, looking at these last three months, I would say there is no more critical timeframe in the calendar year than these three months.  But I also want you to be thinking about 2021. Now 2020 has turned into a major cluster, right? This is not what any of us has had anticipated but studies have shown that people are still going to give and about 15% are going to give more here in the next three months than they gave previously. A lot of people pushed pause on their giving because they wanted to see what was going to happen during this pandemic so there’s a lot of money that’s sitting out there more than ever before. People are still going to make that gift; they’re still going to want to give a certain percentage of their income to a charity. Know that there is so much money sitting out there, waiting for you.  All you have to do is ask for it.