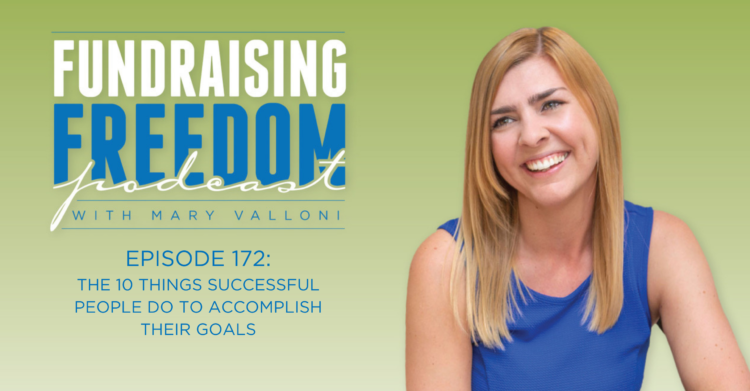 I want to share with you today some common things that successful people do.

Number one, they don’t allow fear to cripple them.  Now think about people who are public speakers, they do not let the fear of public speaking stop them from accomplishing or stepping foot on stage. They don’t allow fear to cripple them. And they allow that fear to be that emotion. They just make that little flip of the switch and now all of a sudden, it’s like, ‘okay, I’m not afraid of this. This is fun. This is exciting. It’s something that I’m, I can actually do.’

Number two, they don’t let others influence their decisions. When you set a goal, whether that is a fundraising goal, recruiting volunteers, or whatever it is, successful people don’t let other others influence their decisions. They make up their mind and they move toward it. They don’t actually care all that much about making everybody happy. And I know for our people pleasers out there that is so difficult because you want to make everybody happy. But if you’re going to actually get to the end result and get to that goal, you have to stay focused on what it is that you want and not allow others to influence your decision or influence that end goal.

Number three, they don’t give up when times are tough. They keep pressing on, and they’re disciplined about it. When they move forward, they do whatever it takes; they stay focused.

Number four, they see the lesson when things don’t go as planned. And that is hard when things don’t go your way, right? But the thing is, there’s always a lesson when you’re moving towards an end goal. I can remember so many times when I was raising funds and thought it was just a waste of my time. It was a waste of my energy. But now that I’m several years out from that moment, it’s easy now to see lessons I learned. I get why I had to go through it. In so many areas of your life, you look back and realize you learned so many great lessons from those hardships, the pain you felt was visceral, it’s deep. But successful people are focused on making sure that they see the lesson as they move forward.

Number five, they care about the journey. They wake up thinking about how they’ve come such a long way. And I don’t know how many times you feel that where you’re down on yourself because you think you should be further than you are. But when you can actually start to see the pieces coming together and you’re taking the steps towards it, you actually really enjoy the journey. You enjoy the process that you’re going through. I do want to encourage you in that because it’s really easy to get to the end goal and then think to yourself, ‘well, that was a lot of work and I don’t ever want to do that again.’ Because you didn’t really enjoy the process that you went through, and it was painful. And maybe you were begging people for money, and you’re asking for something that you felt like they didn’t want to give to you. And so it didn’t feel good. And fundraising should feel good. I just want to remind you of that, that when you ask somebody to be a part of the work that you’re doing, it should be a win-win for both sides. I’ve said this before that I love, love, love fundraising, but that’s just because I really love people. And I hope that you can see that too in the work that you’re doing.

Number six is they believe in themselves. In the process, they never lose belief. Belief is huge for me. I have spent many episodes talking about believing not only in yourself but believing in the work that you’re doing and having a belief that it’s actually possible. If you don’t believe that you can actually accomplish the goal, you’re obviously going to give up, you’re not going to continue forward. But when you believe that the end result is absolutely doable and that you can definitely get there, then this belief thing will just continue to press you forward and push you towards the end goal. I want to make sure that you’re staying the course throughout this entire process. That’s why successful people accomplish their goals, they don’t give up on them, they believe in themselves and in the process.

Number seven, they surround themselves with positive people. I have worked with boards and advisory groups and volunteer groups, where the people that were on the team weren’t so positive. They came in with the devil’s advocate kind of message.  While I don’t have a problem with people who push back on the ideas and things that are brought up as this can make for a better organization, the negative people who just want to show up and don’t think they’ll ever achieve the goal can absolutely kill a fundraiser.  If you have those people in your group, you have got to figure out a way to get them out of there. I’m not a huge advocate of firing people, but if they need to go. What I encourage is to find a new place for them to serve that’s going to allow them to really use their gifts and skills.

Number eight, they pivot and adjust. As you know, we are in a crazy season and you have had to pivot. You’ve had to adjust the way that you’re doing things. You can’t get that huge group of people in one room together right now and you’ve had to move online, do things virtually change the way that you’re raising funds. If you weren’t doing that before, being able to pivot and adjust is what will actually get you to the end result.

Number nine, they don’t need a guaranteed path to success. This follows right along with being able to pivot and adjust. Now I give you a seven-step process to fundraising freedom, and I believe in it, I believe that it’s a plan that works over and over and over again. But the thing is, is that when people give up on their goal, or they bail on it, it’s usually because they feel like they don’t have a guarantee that it will be successful. I can’t tell you how many people do not follow through with the things that I encourage them to do because they’re not 110% sure that all this effort will be worth it. The people who are successful, they don’t need a guaranteed path to success. The fact that there isn’t a guarantee actually makes people enjoy the process even more because it’s fun.

Number 10 on my list is successful people would rather work towards long term rewards than short term rewards.  We live in an instant gratification world, we want it and we want it now. But fundraising and achieving those goals come because you are willing to put your head down, go to work, and do the process so that you can actually accomplishing that goal.  When it comes to fundraising, so many people want to do those short-term fundraising events, which obviously we can’t do right now. And I’m so grateful for because those fundraisers are the ones that burn your staff out. They’re the ones that burn you out. If you have to do those fundraisers every single weekend or multiple times in a month, it is just so overwhelming. And we’re looking at the short term with that. If you start looking at the long term, you’re going to start looking at signature fundraising events. And that’s what I often teach on and that’s my signature program, Fundraising Freedom Academy. That program is all about creating your signature fundraiser. I’m not talking about the large group gathering. In years past, that is absolutely what was happening, maybe that gala, maybe it was a golf tournament or something significant like that. Now, it doesn’t mean that we’re not going to do other fundraisers along the way that maybe lead into that big fundraiser, but it allows for us to keep our sights on one signature fundraiser and one goal.

I hope that you pulled a few nuggets of information from this and if you are looking to raise funds through a signature fundraiser, please check out Fundraising Freedom Academy. I have a free training on there that goes further in-depth on this topic that we’re talking about today. And it’s just a short training video that you guys can download and start listening to today and start implementing these ideas into your fundraising efforts so that you can accomplish your goal. These next few months, we are gearing up for the year and the largest giving season of the year. I hope you guys know that December, over 30% of all donations are coming in the month of December. So these next few months as you’re gearing up for the end of the year, do not go on autopilot. I’m going to encourage you to step up your game, use these next couple of months to really engage new people into the work that you’re doing, and start inviting people to support your work.