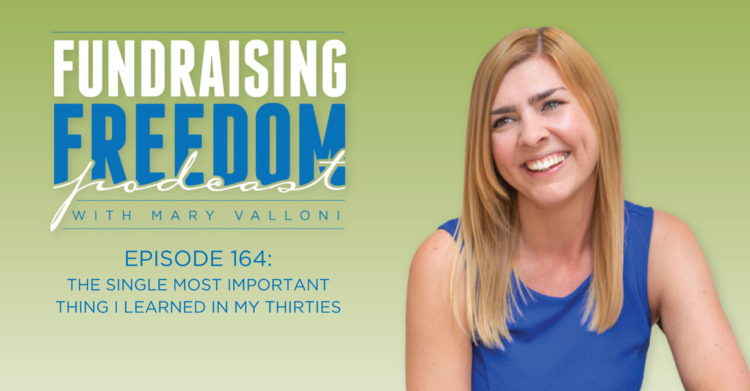 This episode airs the week of my 40th birthday and I’m pretty excited about it!  I’m looking forward to the next decade and letting my thirties live in the past like they are supposed to.  Today I want to take you on a walk down memory lane and share a little about what has happened in the last ten years; not only in my business and fundraising but also the single most important thing I’ve learned.

I was working for the American Cancer Society in my early 30s where I spent my time raising funds, working in a nonprofit, making sure that my volunteers were plugged in, getting sponsors, bringing people in on monthly contributions, and trying so desperately to make a difference in the world.  I was fighting this disease that I felt had taken the lives of so many people and I was fortunate to start a new role and fundraiser that in the end, after 5 years, raised 3.2 million dollars and was a signature fundraiser for the organization as well as the community.  I am proud of what we accomplished, and I was then able to start teaching others what we did which catapulted me into the next phase of my 30s.

In this time period, there was one big incident that occurred, which was the death of my father.  He died from cancer when I was 32, just 3 days before my birthday.  He was the most charitable person I ever knew, and he continues to motivate and drive me every single day of my business, the work that I do, and the life that I live.  I believe that his passing was the catalyst to what I do today.  I had this feeling that year 33 was going to be a rough year for me.  I really started to evaluate what I was doing with my life – who did I want to be?  What was I going to stand for?  I knew I wanted to start my own consulting business and yet, at the same time, I let all these ideas of what that was going to look like cloud what I was doing.  So for the next year, I focused all my attention on the American Cancer Society and tried to do my best work. The same year he passed is the same year the entire organization restructured so I applied for a new job that took me from Springfield, Missouri to St. Louis, Missouri.

I was now in a bigger city and a bigger office.  We had bought and sold a home.  But once I got into the new leadership position, I got that whole year to sit back and dream about what I wanted to do.  I decided that by the time my dad’s birthday rolled around the next year that I was going to be a consultant so that I could help other charities, ministries, and missionaries learn how to raise money and I was laser-focused. I hired a business coach, brought on my consulting client, and everything moved very quickly during that year.

At 37 I released my book, Fundraising Freedom, and that book was what inspired the training that I teach to missionaries, ministries, and nonprofit leaders around the world.  From there, I had my first group coaching where I pulled together nonprofit leaders who trusted me with their organizations, and we started coaching together as a group.  Although it looks a little different, I still lead that group today, and it’s called the Fundraising Freedom Academy.  About a year later, I started the Fully Funded Academy, which is for missionaries.  Those are my two major programs I lead right now.  I love every single second of what I get to do.  My 30s went from a season of trying to figure everything out and being a student of my fundraising craft, the loss of my dad, and then into the work I do today.

Reflecting back on my 30s, the most important thing I learned was belief.  I had crazy belief about what was going to happen next.  Every step along the way I believed that something better was on the horizon.  I had that dream of being a consultant and I started taking steps to make it happen.  I actually used the FREEDOM process I teach in my book, there are no secrets here. The definition of belief is the acceptance that a statement is true or that something exists.  That you have trust, faith, or confidence in someone or something.  And I had the trust, faith, and confidence in that next phase of my life.  I leaned in and believed that things were going to happen for me.  When it comes to belief, if you can stand on it, it’s amazing what you can accomplish.

One of the books that was big for me in my 30s was, Think and Grow Rich by Napoleon Hill.  It was the book I read in January 2016 and it was where I learned that you have to have a burning desire for the thing you want to accomplish.  Hill says, “Whatever you conceive and believe you will achieve.”  That statement came right from the Bible.  Mark 11:24 “Whatever you ask for in prayer, believe that you have received it, and it will be yours.”  It doesn’t matter to me if you are a Christian believer or not, what I want you to see is that whatever you ask for you will receive.  Verbalize it.  Write it down on paper.  And as soon as you get that burning desire, all of a sudden it becomes real.  Whether or not you pray or not doesn’t matter.  What matters is that you asked.  Ask for what you want, not what you need.  Wanting is all about freedom.  Need is such a scarcity word and you know I’m all about ending the lack and scarcity mindset and to be focused instead on freedom.  When you have freedom in your nonprofit and the work you do, you can ask for whatever you want.  Today, I challenge you to ask for what you want, not what you need.  It’s time to have a new belief system because remember, what got you here won’t get you there.

What Got You Here Won’t Get You There: How Successful People Become Even More Successful by Marshall Goldsmith