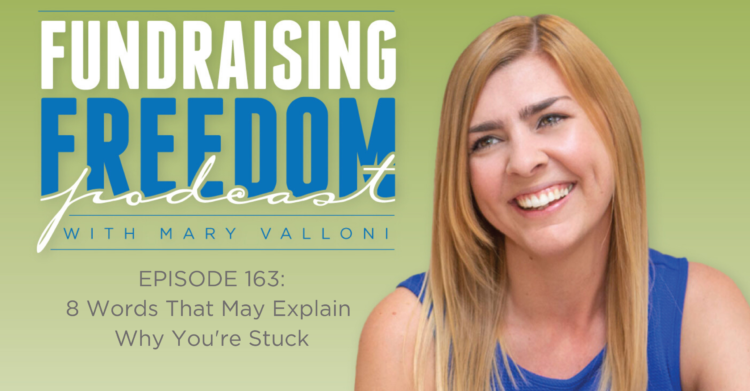 Today we are talking about the eight words that might explain why you’re stuck.  As we’ve been talking about over the last several episodes, we’ve been dealing with a pandemic and trying to navigate not being in our offices and adjusting to working from home.  Now, some of you may have already been working from home, but it’s probably still a little different or difficult to have conversations with people.  The eight words that may explain why you’re stuck come from a book by Marshall Goldsmith, “what got you here won’t get you there.” We have leaned on what got us success – what’s worked in the past.  And then rinse and repeat.  But during this season, I’m going to assume you’re struggling.  With everything happening now, your past fundraising efforts are probably not working in the same way now.  We have got to go back to the drawing board and to our vision and reassess where we want to go.

Today I’m asking you to let go of the old ways and accept that it’s ok for change to happen.  Change is hard.  It’s hard to look at things from a different perspective.  I want to help you shift your thinking away from the way you used to do things.  Let’s not depend on old habits, it’s time to think about the future.  I want to give you one thing to think about and that is who you need to know.  Not what do you need to know or how are you’re going to fix your fundraising efforts, but simply who.  When you look back and think about any big successes you’ve had, you most likely had that success because you surrounded yourself with someone new.  Someone who had the ability to think a little bit bigger and differently.  Who do you need to know?  This is a question I write on my whiteboard all the time. Anytime you push yourself to the next level, you’ll always need to surround yourself with different people.  Now, you may have been stuck over the last several months or longer and it’s because you’ve spent all your time around the same people. Many of you have a board of directors or an advisory group who tend to be the same people year after year.  They are probably really wonderful people and I’m not telling you to get rid of them, I’m just telling you that if you continue to surround yourself with the same group of people, you’re going to continue to do the same behaviors.  No one is stretching you or asking you deeper questions.  It’s time to start infusing your cause with new voices, new faces, and new ideas.

I’ve recruited many councils, boards, and other groups of people.  What I notice is when people start to become complacent, they get a little too comfortable.  You know I’m heavy on building teams and finding people who are going to push you and who have the skills and knowledge to take you to the next level.  So, what do you need to do today in order to actually get unstuck and start seeing progress?  Think about someone who wants to run a marathon.  What are some of the things they do to start preparing?  You don’t need to know how to run a marathon, but what you do need to know is who.  Do you need to know a trainer?  Do you need to know someone who’s actually run a marathon?  You need to start surrounding yourself with a group of people who say ‘this is no-brainer because I’ve done it before.’  When you look at a goal that seems completely impossible and you meet someone who has actually done it, your mind shifts so quickly to thinking you can do it too.  When you think about how much money you want to raise, all you have to do is to pay attention to someone else who is already doing it.  That’s why I’m a huge advocate of reading books, listening to podcasts, and watching YouTube videos.  I am always consuming information from other people who have already done what I want to do.  Start looking for people who have already accomplished what you want to accomplish.  When it comes to fundraising, what you’ve done in the past may not be working for you now.  If it’s not working for you now, it’s because we are in a new season and when it comes to raising money, it’s always evolving and changing.  There are new technologies, new resources, and people are behaving differently.  The tactics that got you here are no longer going to get you where you want to go.

People still want to give to charity and good causes.  You’re not out of luck right now.  People still want to financially give to your cause.  It’s time to nix ideas that that don’t work.  Don’t force people to go to a physical event when they don’t want to go to a physical event.  Start having conversations with the right people.  These are the people who have the ability to give to you and give to your cause.  Who is going to be able to tell you what you need to do?  The givers.  The ones who have the ability to give to your work.  If I want to get a donation from somebody, you better believe I’m going to be knocking on the doors of the “whos”.  How do they want you to communicate with them?  How do they want you to share opportunities with them as well as the work you’re doing?

I hope this paradigm shift gets you thinking of all the “whos”.  Who do you need to know?  Who has done it before?  Who can show you the way?  Who can be a guide for you as you move forward?  And remember, you don’t have to know everything.  You just need to know what you’re the best at and how you’re helping people in the community and how you’re changing lives.

What Got You Here Won’t Get You There: How Successful People Become Even More Successful by Marshall Goldsmith