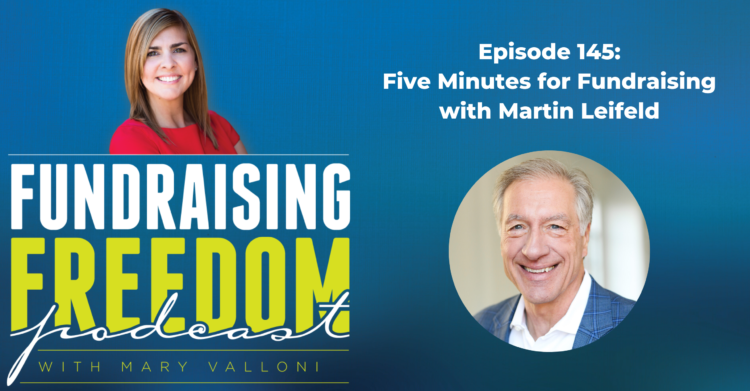 Martin Leifeld is an author, consultant, coach, and public speaker.  Martin is a professional fundraiser who’s raised a staggering 500 million dollars in his career that has spanned more than two decades.  Two years ago, he was named the Outstanding Fundraising Executive by the Association of Fundraising Professionals in the St. Louis Regional Chapter.

Why are you so passionate about fundraising?

First of all, funding enables nonprofits to pursue their missions and grow and expand their impact to improve the world and the lives of others.  If you don’t have funding, you don’t have much of a mission.  Fundraising is the primary way an organization can maintain its ability to do its job.  I’m passionate about working with people who are making meaningful contributions of both financial as well as time.  The other thing I feel passionate about is that our work is honorable work.  It’s almost a calling.  We get to develop ourselves and help donors develop themselves and look to the bigger world.

You talk about how fundraisers are facilitators of philanthropy.  How did you come up with this terminology?

It came from experience and reflection.  As I went through this experience of working with donors and watching them being transformed, I began to look at it all differently.  I realized that in one way it’s about us, because we as fundraisers have to pursue excellence, but it’s so much more than that because it’s about the donor as well as the organization we represent.

Based on your personal experience, what do you think is holding back so many nonprofits?

On the negative side, fear and ignorance.  We all feel fear and I think looking at stepping into fundraising can be daunting and anxiety-producing.  A lot of this we can address through education; better understanding what it’s all about.  The other part is that there has to be a commitment to pursue major gifts.  If you want to grow your organization and sustain it, you have to grow major gifts as part of your method.  Major gifts require several things.  One, it requires your executive team being educated about fundraising and being willing to be participative.  You have to educate your board, so they have a realistic view and an appreciation of what it takes to raise significant dollars because it takes time.  What we’re doing is bringing someone into a deeper relationship with the organization.  The other dimension to major gift-raising, is you have to be committed budget-wise.  You have to be willing to spend money over time.  As a result, your nonprofit begins to make more money, you’re able to match and exceed what you’re doing, growing what you’re doing.  Celebrating philanthropy in an organization is so very powerful.  It is a way of telling the entire organization that your mission matters.

What would you recommend nonprofits do to really take their fundraising to the next level – especially when it comes to major gifts?

I think this is a lifelong journey.  Pursue competence in the field.  Competence consists of two basic elements, learning and accruing experience.  You can be incredibly knowledgeable, but it doesn’t mean you know what you’re doing because you cannot gain experience without time.  There are no shortcuts to experience.  Over the course of time, I became pretty competent.  According to Malcolm Gladwell, it takes 10,000 hours of practice to master something.  And that’s a long time.  Wherever you are in your journey, be committed to those two things.

Tell us more about the script you created for yourself for talking with potential donors.

Sometimes I’d have two or more hours in the car, and back in those days, I was listening to cassette tapes on major gift fundraising.  I would rehearse what I was going to say.  First, I would think through how the visit was going to go and I would visualize it – the warm welcome, the friendly conversation, the positive nodding of the heads, the shaking hands at the end.  Then I would rehearse the actual sentence, “John and Mary, would you consider a gift of $25,000, which you could pay over 5 years, in order to help our students get the education that they deserve and should have?”  I would say it two dozen times because it helped me address my anxiety and fear.  Don’t let fear stop you.  When you schedule a meeting, those folks know you are there representing your organization with a mission that matters and they are at least curious about it, otherwise, they wouldn’t have taken the meeting.

Tell us more about your book, Five Minutes for Fundraising.

The reason I named it Five Minutes for Fundraising because each chapter in one way stands on its own.  It came out of my video work.  I realized that my videos were being watched by some, but not everyone wants to watch a video.  It’s more about noodling and reflecting on ideas.  I recruited 26 collaborators, who are experts in the field of fundraising, who were able to add color commentary to my ideas and were able to make the book so much richer than the original videos.

What does fundraising freedom mean to you?

Over time, along with accruing competence came confidence.  People are free around me; they are honest with me and I can be honest with them.  I can draw upon all my experience and try to bring benefits to the person across from me.  In that whole exchange, there is freedom because I’ve put the time in.  I earned that kind of freedom and it’s a joyful place to be.