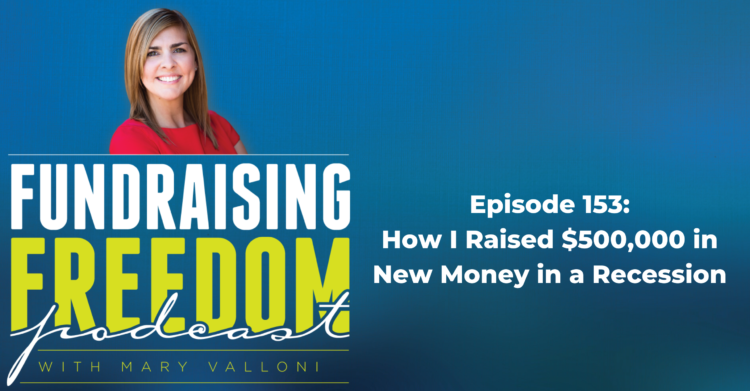 Today I want to talk through how we can take back some control and turn things around for our causes so that when we come out of this pandemic, we are stronger than ever.  I want to share a few ideas with you as you’re walking through this season.

First, it’s all about perspective.  There are two different ways you can look at this time – you can look at your fundraising as “oh no, we’re going to lose so much money during this season,” where you’re freaking out and leaning toward a decline in funding versus, looking at this time as an opportunity.  What can you do to make this your greatest season ever?  I’m not sure which side you sit on today, but I hope that by the time we are finished with today’s episode you are sitting on the growth side of the fence.

In 2007, I was hired by the American Cancer Society to start a brand-new fundraiser.  It was a gala called the Cattle Baron’s Ball, which was an event that was taking place across the country.  When I was first hired, I was told that the ACS had never hired this position before.  I was so excited because I felt like I had been given the chance of a lifetime.  I did not take this task lightly. I spent my days walking into that office studying, learning, and trying to figure out what I needed to know about the organization so I could really talk intelligently about the work being done.  I did not waste a moment of time while I was there.  I don’t know how long you’ve been in your organization, but I want to ask you, “are you hungry?”  Are you hungry to make a difference and to fulfill the mission and vision of your cause?  If you are questioning your attention and commitment, I challenge you to start right there.  How can you get that back?

My mindset was new money, new money, new money.  I was knocking on doors, I was making appointments and making friends.  I was inviting people to volunteer and trying to create new volunteer roles and positions so I could get myself in front of different companies and individuals.  I spent every day researching my competition – what they were doing, who their sponsors and top volunteers were, and their successes.  What I want you to think about here is if you’re looking for new money, you need to change your perspective toward opportunity and away from the fear and loss.  You have to push everything you knew before aside and start looking at today.

Number two, I want you to create something new.  Start over.  I’m not saying to you need to completely scrap everything from the past, but you need to start from a new perspective.  Innovate.  Be creative.  Take something you’ve done in the past and modify it.  Obviously, gathering in big crowds is not going to be an option this year.  Allow for time in your schedule to think through how you will either create something new or modify something from your past.

Number three, I want you to consider inviting volunteers to help you create this new idea.  I strongly believe in engaging volunteers and know that our most successful events/fundraising happen because we have a lot of people who are all moving in the same direction together.  We often call that a movement, we are all moving in the same direction.  You have to invite people to serve and to step up.  If you try and go this alone, you will only get so far.  I want you to really focus on how you get your volunteers more involved because this is what will help you create synergy to do things you’ve never done before.  I was able to raise half of a million dollars during a recession because I found that “one” volunteer who I was able to engage.  Imagine for a moment that you are doing no fundraisers and you’re starting from scratch.  So, what are you going to do?

In my case, I reached out to an acquaintance I met at a networking event.  She sat down next to me and said, “Mary, I know everybody in this town.”  And it wasn’t in an arrogant sort of way, it more of a statement.  She had been working in the community for a long time.  And even though we hadn’t seen each other in a few years, I reached out to her, not because I wanted her dollars, but because I wanted her advice and feedback on the pulse of the community.  We left that call with her telling me she would do some research and get back with me.  She called me back in a matter of minutes after typing into Google, American Cancer Society gala and found the Dallas Cattle Baron’s Ball.  She was like, why don’t we just do what they are doing?  Now granted, the Dallas Cattle Baron’s Ball was well established and was raising well over $3 million dollars at that time.  We were in an ag community and have similar cultures and so we went with it and in just over 18 months, we netted $500,000.  Do you see how this all started? It was literally one conversation with one person and all I did was ask her advice.  And, it was all done in the midst of the Great Recession of 2008.  I have replicated this same fundraiser and helped thousands of organizations and individuals do this same thing.

I was very fortunate in that I had a great mentor.  I had him walking me through this every step of the way.  I believe everyone needs a mentor and I want to be that for you and your organization.  We all need a guide – especially if you’ve never raised that kind of money before.  I think the reason so many of us fail is that we get it in our minds that we have to do our own thing, all on our own.  This is a false perspective.  It’s time to flip the switch and come from a fresh perspective.  Work with people you like, invite people into a new fundraising campaign in this new season.  As soon as you do this, you’re going to love the people you work with, you’re going to love your job, and ultimately, you’re going to love fundraising.