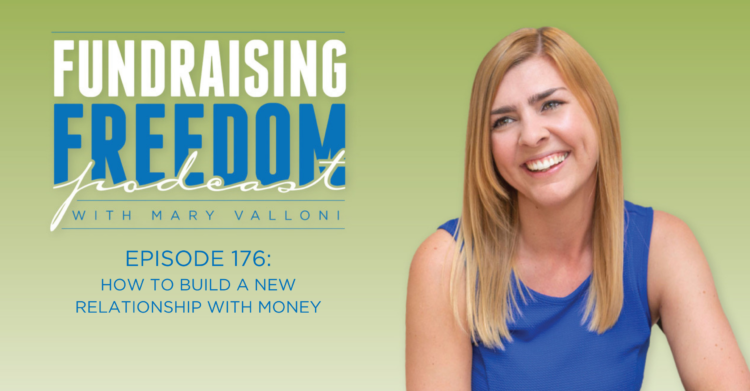 We are talking about how to build a new relationship with money today. In the last couple of episodes, I have been really practical in my messaging. But today, I wanted to take a little bit of a different turn on our conversation and talk specifically about money itself. Now for those of you who have read my book, Fundraising Freedom, I talk specifically about our relationship with money (on page 103) and that is what I want to dive into. Some of us have had really good experiences with money, some of us not so much. And so I’m just going to share a few stories and ideas that you can think about and figure out whether or not some of this stuff might be holding you back.

First of all, I’ll just share a little bit about my upbringing. I’m the youngest of seven and we all have names starting with the letter M. If you have read my book, I talk about my older brothers and sisters who were in college, who were really a catalyst into my fundraising because I just enjoyed spending time with them. Having such a large family, I was never really alone. And that was really incredible. I never thought much about the things that we had, because I valued time so much. I had a lot of hand-me-downs, pretty much everything was secondhand stuff, and we always had food on the table. There were really no complaints. But we did not live, what I would consider, an American wealthy lifestyle. When I was in the second grade we moved across the state of North Dakota and that’s really where so much of my life changed. We lived in this really great house when we were in Dickinson; the whole family was there. Then all of a sudden, the kids all started going off to college and so we then picked up and moved to the same college town that all my older brothers and sisters were in. Now instead of living in a house, my mom and dad decided that they were going to rent a two-bedroom apartment. We instantly went from having this nice big house to then living in this small apartment complex where I was sharing a bunk bed with my sister. And as much as I love my sister, that was probably the worst thing for our relationship. The four of us were on top of each other but more importantly, I saw how my friends lived. They had these nice big houses with pools – all the stuff that I so wanted. It felt like this poverty versus abundance way of life. I wanted to be around people who were living an abundant lifestyle.

My dad, although he is the catalyst to what I do today, was the most charitable person but he was also an extremely frugal man. I mean, if he could fix the car, he would keep that car for as long as possible until the wheels were falling off. We drove the worst clunkers you could ever find and he was always just so proud of the fact that he could turn something that might have been worthless to somebody else into a usable thing. It’s such a quality that I appreciated about him. But at the same time, I just remember as a kid spending so much time just begging him to move into a house. I would look through the newspaper to see what houses were for sale because that’s how people sold houses back in the day. They built these beautiful townhomes a block away from our apartment and I wanted to live there so badly because they were so much better than this apartment.

By the time I graduated from high school and I was figuring out what I wanted to be and what I wanted to do with my life, it was so important for me that money never stopped me. I would get the scholarships, I worked the job at Sears, I would sell the most. I just never wanted to feel without or never wanted to feel that lack and scarcity again, which drives me so much. When it comes to fundraising, I don’t want any charity to feel that lack and scarcity. I don’t want you to feel like you can’t keep your doors open or do the work that you’ve been called to do. I want you to be able to see that when it comes to your own personal finances, and the finances of your organization, there are all of these preconceived notions, all these things about your childhood that come up in your fundraising efforts. Because if you are afraid of asking for money, if you feel a little bit shy around asking for money, I bet you can correlate that back to something in your history, your background, and your childhood. I want to reframe your mindset around fundraising and reframe your mindset around money. I want you to start looking at money in a completely new light.

As you’re thinking through the year and support that you’re raising, or you’re looking at your budget for 2021, I just want you to start thinking about how you can create a happier experience for your donors. Are you creating an environment of lack and scarcity, where people aren’t necessarily attracted to your cause and attracted to you because you reek of desperation? If there’s always a feeling of anxiety and lack and that feeling of deprivation; nobody wants to give to that. People want to feel like their dollars are actually making an impact. So if you’re in the current place where everything feels very scarcity-minded, I want you to start thinking about the upcoming year and how you can start making some shifts so that you’re ready to receive donations. Think about when people give to your charity, and when you give to charity, think about the joy, think about the happiness that comes when you get to give to that cause. I think that sometimes we forget that when we ask somebody to give to our cause, there is joy, there’s really great excitement and happiness for them to be able to give to our cause. But we have to create that environment so that they really do feel happy about every single donation that they give to your cause that they never once question, are they doing what they say that they’re going to do? Are they actually appreciative of our partnership? It all comes back to the fact that there’s such joy being in partnership together; that the relationship that you have together is really changing lives and it’s making a huge difference.

The big takeaway for you today is that I want you to spend a little bit of time in reflection. Maybe bust out a journal or a sheet of paper and just jot down some of your money history. Think a little bit about how you can have a new relationship with money around happiness and around gratitude. See if you can kick that into your day-to-day life in a new way as you wrap up the year-end.