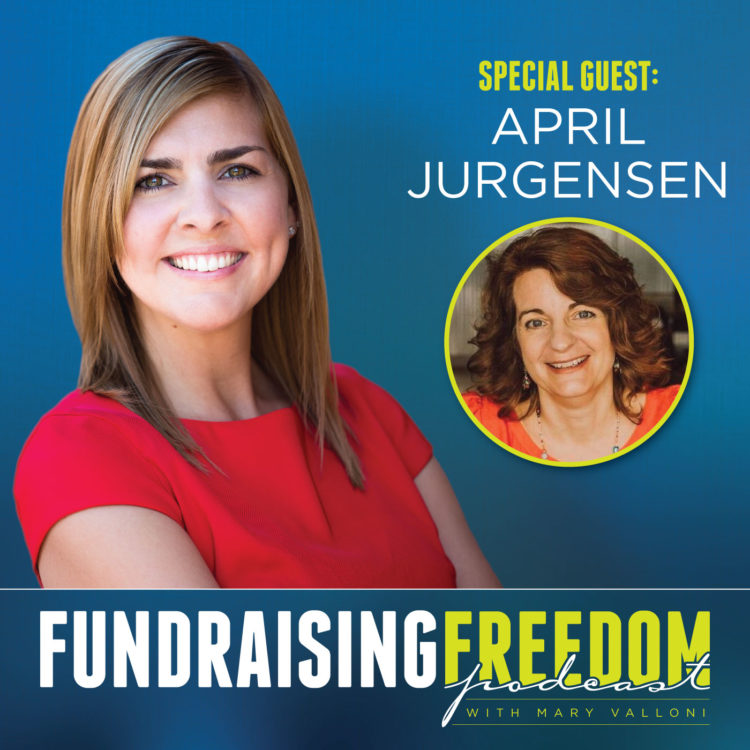 My guest today is April Jurgensen, who is the co-founder of The Boaz Project and one of my Fundraising Freedom Academy students.  April just recently won an author academy award for her book, The Orphan’s Abba.  April and her husband inspire and equip leaders around the world to care for orphans in their own communities.

Tell us about the fundraising project you’ve been working on this last year.

We have called it homes for orphans but it’s basically providing housing solutions for specific children’s homes in Russia, India, and Kenya.  The largest portion is in Kenya where we plan to build a three-story apartment building that will have individual units for house parents and the orphans they’re raising.  Because land is so expensive in our part of Kenya, it makes more sense to build up rather than build several tiny homes.

When The Boaz Project started, we were coming from another mission organization.  In our minds, the way you raised funds was through a letter because this is what most missionaries are trained to do.  My degree is in writing, so writing is familiar and comfortable and so that’s what we did; we sent a lot of direct mail.  I’m still a believer in direct mail, but one of the key takeaways I got early on from the Academy was there’s a whole world of fundraising beyond that, especially if you’re looking for a large gift.  No one just opens their mail and sends you a check for $20,000.

Many people we’ve talked to ask us if we’ve run a feasibility study and look at us like we’re crazy for trying to raise this kind of money.  The real shift for me came from changing my mindset around fundraising.  I had all of these supporters who I simply never asked if they would be willing to give larger gifts.  Now, after 7 months of working the program, we are 40% of the way to our goal.  We are entering the season where most of the giving comes into a nonprofit.  But I also look at it like if we don’t hit our goal by December 31st and we’re around 50% of the way there, it’s much farther ahead than we would be if we were just sitting around doing feasibility studies and discussing whether or not we should take it on.  And the second half is always easier to raise than the first because you’ve got the momentum and that there are others who believe in what you’re doing.

How did you go about making the ask to get your first chairman?

The organization had pretty much gotten as far as it was going to go with our contacts.  So, I took your advice and found someone who is well connected and well respected in our community who others want to be around.  One name kept coming to mind, so we made the ask.  The first time we talked to him, he declined, and it was because he’s involved in so many good things and didn’t feel like he had the capacity to take on anything else.  In the time between his decline and trying to figure out who our next ask would be, our pastor offered me a 20 minute slot in both church services and the next day I got an email from this gentleman who said God was talking to him during my speech and he realized he was supposed to be a part of what we’re doing.

What do you think is holding back so many nonprofits from take that next step in the fundraising space?

I think there are two answers to that.  First, I think we spend too much time focused on programming.  Yes, it’s the whole point of what we’re doing, but the problem is you can’t continue to do the programming if you’re not paying attention to your donors; nurturing and investing in them.  Second, so many of us are very independent, cheap, and figure the least expensive way to get something done and stick with it.  The truth is you’re going to get so much further in community with a leader who can show you the ropes.  One of the things I love about Fundraising Freedom Academy is the community Mary’s built.  It doesn’t matter if it’s a church or a nonprofit, communities follow their leader’s personality.  The community that follows Mary Valloni is very approachable, optimistic, and cheer you on.  It also helps keep you accountable to your goals.  I’ve been telling myself the lie over the years about how I can’t afford coaching or courses.  And books are great, but there’s nothing like the community that the Academy provides.

April has been a great student of the Fundraising Freedom Academy.  She’s watched the videos, done her homework, and has had great success.  This Thursday, November 21 at 1PM CST, I’m doing a free training on how to put on a six-figure fundraiser and giving you the tips that I’ve shared with April and my other students.  If you are raising $50,000 or more and would like to know more about the Academy, you can apply at http://bit.ly/applyforFRFA.  From there, my assistant will set up a 20-minute conversation with me to see if you’re a good fit and you’ll get the rest of the details on how to sign up.

To read April’s book click on this link, The Orphan’s Abba:  Stories from Orphan Care that Reveal God’s Love for You or visit boazproject.org to find out more.

Join us for Mary’s free training on “How to Create a Successful 5-, 6-, or 7-Figure Fundraiser in 2020” Thursday, November 21st at 1pm CST. Register here ==> http://bit.ly/successfulfundraiser.